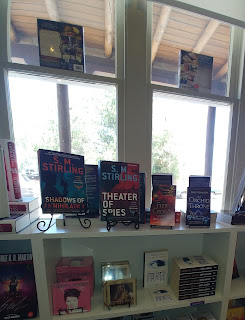 My books! Spotted in the wild at George R.R. Martin's Beastly Books.

Our topic at the SFF Seven this week is "Sex on the Beach & Sand in the Wrong Places: What's your favorite bit of pop-culture fiction doesn't work well in reality?"

For the record, I'm going to put out there that you CAN totally have sex on the beach without getting sand in the wrong places. It's not even that difficult. Are these other people rolling around in the sand with sticky parts first?? I can't even.

I don't spend a lot of time thinking about fiction vs. reality. It's pretty clear to me - as I think it is for almost everyone - that stories aren't the same as real life. We want different things from our stories than we do in life. The fact that people even ask about it, like the perennial question about whether readers understand that romance in books isn't the same as in real life, is a head scratcher to me.

Um, yes. We DO understand that fictional romance is different. That's why it's called FICTION.

Every time someone complains about how there should be more awkward, terrible sex in romances I want to ask if they didn't get enough of that in their own lives. Really, that's what you want to read about for entertainment? Okay...

Anyway, one disconnect between fiction and reality is the domineering romance hero. He's broody. He's quick to anger and deliciously sexy when he loses his shit. He's protective, obsessed with the heroine to the point of suffocation. He's powerful, ruthless, and an irresistible force of nature.

We love this guy!

We would never in a million years want one in real life.

The term "alphahole" is often applied to this kind of hero, though I don't much care for it. I think most Romance readers use it for this kind of hero who goes too far into asshole jerk territory. And, pedantic types who seem unable to distinguish fiction from reality, will go on about all the behavioral red flags madly flapping here.

True enough. Like I said, we don't want this guy in real life. It's about the fantasy.

What is it about the fantasy that works here? I dunno. Could be an atavistic thing where that silverback gorilla still wows us and makes us feel safe and fertile. The herd buck is majestic and thrilling, no doubt. Also, I think power is interesting to us, no matter what form it takes.

Really, it's no conundrum at all.